At Monster Pest Control, we intend to make you feel secure by protecting your home or business from spiders. We are licensed, certified, responsible and specialists in spider control in Miami. Learn more about the different types of spiders found in South Florida. 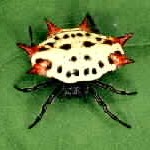 Spiny orb weavers are one of the many beneficial spiders we have, since it preys upon small pests that are present in woodlands and shrubby gardens. They help to control overpopulation of these insects. Spiny orb weavers are not dangerous and would easily be overlooked if not for their unique coloration.

Females are 5 to 9 mm in length and 10 to 13 mm in width. Males are 2 to 3 mm long and shorter in width. They have six abdominal spines present in all morphs, but color and shape differ in regions. Most individuals have white spots on the underside of the abdomen, but the color of the back and spines may be red, orange or yellow.

Visual communication is used during courtship. Upon contact with each other, the spiders vibrate the web. Males use a rhythmic pattern when vibrating the web during courtship. These spiders also move up and down their silk lines to show a reaction to other creatures. 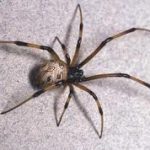 The brown widow builds its web in secluded, protected sites around our homes, often very near our presence. It has a fondness for buildings but will construct its web in all kinds of man-made structures, and even vegetation. Some typical sites include inside old tires, empty containers such as buckets and nursery pots, mail boxes, entry way corners, under eaves, stacked equipment, cluttered storage closets and garages, behind hurricane shutters, recessed hand grips of plastic garbage cans, undercarriages of motor homes, underneath outside chairs, branches of shrubs.

The widow spiders are generally non-aggressive and will retreat when disturbed. Bites usually occur when a spider becomes accidentally pressed against the skin of a person when putting on clothes or sticking their hands in recessed areas or dark corners.

Because they vary from light tan to dark brown or almost black, with variable markings of black, white, yellow, orange, or brown on the back of their abdomens, brown widows are not as easy to recognize as black widows. The underside of the abdomen, if you can see it, contains the characteristic hourglass marking. 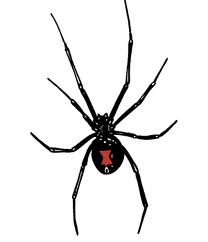 Widow spiders are well known for their potentially dangerous bite. Widows have potent venom, which contains the neurotoxin alpha-latrotoxin that causes adverse reactions in their victims.

The Southern black widow typically mates during the spring and summer.

The female Southern black widow typically lives an average of 1.5 years while the male survives between two to five months.

Typical outdoor habitats in which spiders are often found include wood and rock piles, rodent burrows, and hollow tree stumps. Indoor habitats include outhouses, garages, sheds, and basements . Although they primarily inhabit low-lying areas, their web can be found several meters from the ground.

Antivenin may be used to treat patients who are experiencing a severe reaction.

For Safety always wear gardening gloves, this can help prevent being bit.

In indoor areas, bites frequently occur when spiders are hiding in shoes that have not been worn recently or while searching through old boxes. Shaking out clothing and shoes and using gloves while working in areas that spiders may be found such as basements or attics can help prevent a bite.

Adult Brown Recluse Spiders have a leg span of about 24 millimetres. Their body is around 3 – 8 millimetres long and about 3 – 16 millimetres wide. Males are slightly smaller in body length than females, however, males have proportionally longer legs. Both male and female brown recluse spiders are venomous.ecluse spiders have only six eyes that are arranged in pairs in a semicircle on the forepart of the cephalothorax (the first (anterior) major body section), with one median pair and two lateral pairs. Other Spiders have 8 eyes.

Indoors, they may be found in attics, basements, crawl spaces, cellars, cupboards and closets. Brown Recluse Spiders may seek shelter in storage boxes, shoes, clothing, folded linens, hanging picture frames and behind furniture. They also may be found in outbuildings such as barns, sheds, greenhouses and garages. Outdoors, brown recluse spiders may be found underneath logs, loose stones in rock piles and stacks of wood. Brown Recluse Spiders seem to favour cardboard when dwelling in human residences, possibly because it mimics the rotting tree bark which they naturally inhabit. Brown Recluse Spiders build irregular webs that frequently include a shelter consisting of disorderly threads of very sticky, off-white to greyish threads.

Unlike most web weavers, Brown Recluse Spiders leave these webs at night to hunt. Males will move around more when hunting while females do not usually stray far from their web.

They prefer to eat cockroaches, firebrats, crickets and other crawling bugs. It even will attack dangerous bugs, such as ants and other spiders.

Long-bodied cellar spiders are commonly referred to as “daddy-long-legs” because of their very long, thin legs, and as their name implies, are found in dark and damp places like cellars and basements. the body being 2–10 mm in length with legs which may be up to 50 mm long.

Long-bodies cellar spiders and their webs are usually found in dark and damp places, such as cellars, basements, and crawl spaces. They can also be found in the corners of garages, sheds, barns and warehouses, on eaves, windows and ceilings, and in closets, sink cabinets and bath-traps.They prefer to eat small moths, flies, mosquitoes and other insects or spiders that are found near their webs. 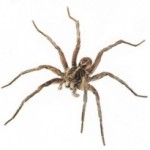 Wolf spiders may enter structures in search of prey. Although they are not inclined to be permanent residents in structures, they often stay once inside. Indoors, wolf spiders tend to remain at or near floor level, especially along walls and under furniture. Outside, wolf spiders can be found under stones, landscape timbers, firewood, leaves and other debris.wolf spiders feed on a variety of insects, including crop pests, they can be beneficial. Wolf spiders can bite, but it’s extremely rare to experience a wolf spider bite unprovoked. They will only bite if they are handled. The presence of wolf spiders in homes is usually accidental.Wolf spiders actively hunt during the night and usually rest in sheltered places during the day. Unlike most spiders, wolf spiders don’t hunt with webs. Instead, they chase their prey using their fast running ability. These spiders are often big and hairy which alarms some people, but they are primarily nuisance pests.

Contact us at 786-488-7235 for a FREE Quote! Our technicians will provide you with informative procedures to better understand our Miami spiders.